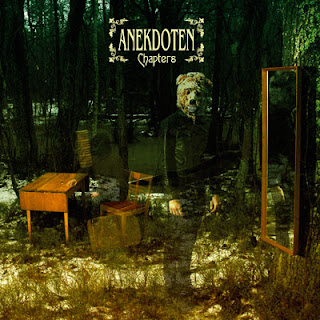 Per chi fosse interessato è uscita in questi giorni l'antologia degli Anekdoten raccolta in un doppio CD. Ecco come il gruppo progressive svedese, che ha fatto dell'ispirazione ai King Crimson la propria bandiera, descrive questo sunto di carriera:
It’s been almost 18 years since the four of us started rehearsing together in a small house in the village of Djurås. Ever since then Anekdoten has been an on-going part of our lives. Admittedly, we have not been the most prolific of bands, but there have been occasional periods of frenzied activity and we’ve continously been creating music together throughout the years. This in itself should qualify for a career retrospective – and here it is!
On the first CD you’ll find our favourite songs from our three most recent albums. As a bonus we finally did a proper recording of a tune we wrote in 1998 called When I Turn. The song was not included on from From Within because we couldn’t play the piano properly. For this release we asked Per Wiberg of Opeth to help us out, so now we can finally release this baby into the world.

The second CD mostly contains material from our early years. Perhaps the most legendary Anekdoten song, the epic Sad Rain, which previously only has been available in Japan, kicks things off. There are also demo versions of three songs from Nucleus. The creative atmosphere that surrounded these recordings made them far too good to lie gathering dust in the archives. Rounding things up are demos of 30 Pieces and Prince Of The Ocean; songs that would be reworked, but not necessarily improved, for our most recent studio album A Time Of Day.
All songs have been carefully (re-)mastered by Hans Fredriksson at Audiosense.