The Beft live at ArcTanGent 2019 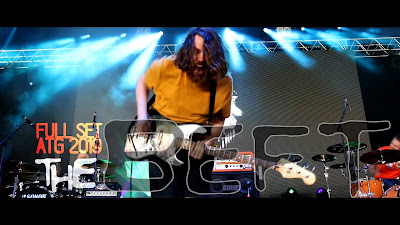 “Cleft were a fucking force of nature. An absolute maelstrom of ideas centered around one cosmic goal – the RIFF. Dan had riffs for days, and performing as part of The Beft only served to underline his talent for composing medical grade riffs.

“I was delighted to be invited to perform with Alpha Male Tea Party and John Simm for this special tribute to Dan. We started at the end – we agreed that a moment of silence wasn’t Dan’s style, and what we should do instead is a moment of noise. A solid, glorious wall of D major, performed by as many of Dan’s friends as could fit on the stage. Working backwards from that, I composed a piece with the AMTP lads, especially for the occasion, which I’m very proud of.

“We also played Cleft’s Trap Door and a ten-minute medley of Dan’s riffs. This was one of the most challenging things I’ve ever had to do, but so, so rewarding and an absolute dream to perform. The climax of the show, the Golden D, had the entire audience in bits, which in turn made us play louder and with even more love. It felt like a bomb going off. But a very lovely one.

“I’ll forever be grateful for the opportunity to pay tribute to Dan, and just for the fact that our paths even crossed. He was an inspiring and inspired player and only now am I realising how good we could’ve worked together. The Beft show was one of my all-time favourite shows at a very special festival. Hail Dan, and hail ATG for making it happen.”