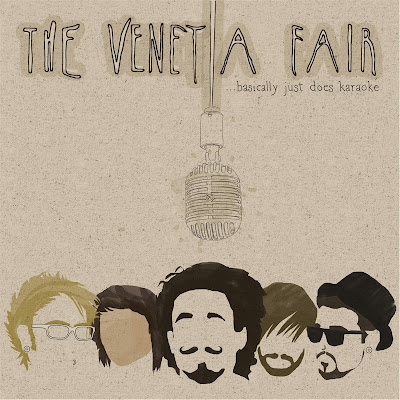 Boston-based rock band The Venetia Fair has officially announced the release of their highly anticipated cover EP, “The Venetia Fair…Basically Just Does Karaoke”, which will hit digital retail platforms on December 24th, 2013.

Plans for this EP stem back to the band’s extremely successful Kickstarter campaign in 2012 which funded their acclaimed full-length record, “Every Sick Disgusting Though We’ve Got In Our Brain”. During this campaign, 6 donors purchased a prize which entitled them to choose a song for the band to cover - as a result the track listing for this EP was born.

Singer Benny Santoro comments, “We said we'd cover anything they wanted and we got 6 very different songs from different genres and different eras in music, each with their own challenges. We had no intention of simply playing these songs as they were originally played (especially Bohemian Rhapsody... we didn't wanna go anywhere near that song!) so we took our time and completely rebuilt them from the ground up to make sure we made them our own. Some of the songs we loved and had to figure out how to tweak them without totally ruining them and some of the songs we hated and had to figure out how to make them good, but I believe we rose to the challenge and, with the help of our Kickstarter backers, put together a very strange and very cool little cover EP. We definitely trashed some classic tunes, but it's all very tongue-in-cheek since we would never take a cover song seriously 'cause it's basically just doing karaoke..."

This pre-holiday treat will feature 6 well know songs (listed below) which have been pulled apart and pieced back together in the whacky, wonky TVF style that their fans have come to know and love.

Keep your eyes on the band’s social media pages for more news, clips, and images leading up to the Christmas Eve digital release.