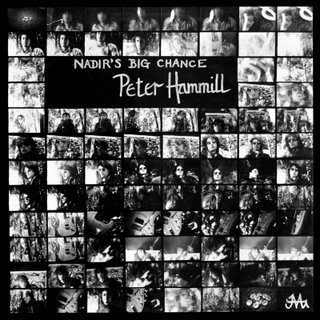 
records selected by Rotten
The Capital Show tracklist, with just a few omissions.

Along with Tim Buckley, probably Rotten's most dissident choice here was "Fleance" by the classic "head" band Third Ear Band, who recorded for Harvest and whose Medieval acid-folk came garlanded with oboe and recorder, "Fleance" is a courtly love song, all "thine two eyes" and "plight my troth", from Third Ear Band's soundtrack to Polanski's 1971 version of Macbeth; mimed, in the movie, by the young Keith Chegwin!

Also decidedly not with the punk rock/McLaren program were "The Institute of Mental Health" and "Nobody's Business", the two tracks by Peter Hammill from 1975's concept album Nadir's Big Chance. In the album's sleevenote Hammill claimed to have been taken over by the alter-ego Rikki Nadir: "this loud aggressive perpetual sixteen year old" playing "the beefy punk songs".
"Now's my big break - let me up on the stage,I'll show you what it's all about; enough of the fake,bang your feet in a rage, tear down the walls and let us out!We're more than mere morons, perpetually conned,So come on everybody, smash the system with the song,Smash the system with the song!"

For all Nadir's prescient proto-punk menace, Hammill was a progressive rocker: edgier than Genesis, for sure, but middle class, literate, musicianly, and signed to Charisma (alongside Harvest, Vertigo, Chrysalis, Deram, and Virgin, one of the archetypal prog labels of the Seventies). In the Capital Radio interview, Lydon raved: "Peter Hammill's great. A true original. I've just liked him for years. If you listen to his solo albums, I'm damn sure Bowie copied a lot out of that geezer. The credit he deserves, has just not been given to him. I love all his stuff."