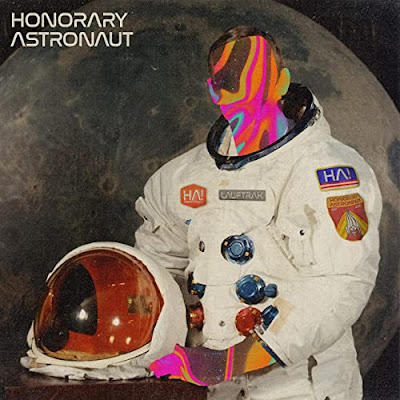 "Hi everyone. I made a thing that isn't The Dear Hunter. Don't fret, though. I can explain. While I have been diligently at work on the newest TDH project(s), it became clear earlier this year that we would need to rethink the schedule we had in place. While this offered additional time to craft and nurture these projects, it also meant more time to spend within a holding pattern, surrounded by unfinished art. This feeling is difficult for me to cope with, as I had grown accustomed to the consistency of releasing new music every 1-2 years. The gestation period for this current project was already uncharacteristically long, due to a number of reasons, but the addition of this indeterminate state off suspended animation wore on me, and I felt a stir-craziness that could only really be satiated by seeing something, no matter how small, through from inception to completion. Enter Honorary Astronaut. At first, I planned to unearth and rerecord a few previously unheard demos, but as I transitioned into studio mode, and found myself spending the bulk of my days on this music, I leaned towards making something new. The result is a 5 song ep, written (with the exception of one track from some years ago) and recorded in late spring. I don't know that it would do me good to try and describe it. Not for the sake of it being indescribable, but because- what would the point be? I can just show you. Today, I am sharing the song "Final Dream Machine" with you, via a lyric video created in collaboration with Erez Bader. We hope you enjoy it."